09.11.2018 was an important day for the Project Group RHÆTIA: In the presence of RhB-Director Renato Fasciati, the Presidents of Bündner train clubs, guests of the RhB-club as well as FairPhotographers together with members of the media, the beautiful promotion locomotive Ge4/4 616 “Filisur” was presented to the public.

The fund-raising locomotive is a central element of the fund-raising campaign, the more as the campaign will be made public throughout Graubünden. The Project Group RHÆTIA intends to collect as much money as possible themselves by means of creative events and actions and at the same time create attention for the Bündner cultural heritage.

What is special about the fund-raising locomotive: a modern electric engine creates promotion for one of its predecessors – certainly a unique occurrence.

As RhB-Director and host Renato Fasciati mentioned in his welcome speech, the fund-raising locomotive has to be regarded as appreciation on the part of RhB for the endeavours and the engagement of the clubs for the historical heritage. RhB are happy to count on the support of the volunteers.

The Project Group RHÆTIA thinks highly of the assistance of RhB, as mentioned by Christian Meyer, the group leader and president of the club Dampffreunde der RhB, and is looking forward to the help of the partner clubs, in particular Club 1889 and historic RhB. Following an efficient and creative teamwork a rollout could be stage-managed and a special fund-raising train for Graubünden is in the making.

Michaela Rapp, graphic designer (at Süsskind SGD) of the promotion locomotive, commented on the concept of the design. The eye catcher is a sketch of the steam engine of Wolfgang Finke. The fund-raising barometer will be kept up to date regularily. Each time when 50.000 CHF will be paid in, a coal briquette will be added, until the white beam will be full. It is remarkable that the club Dampffreunde der RhB since 2014 collected 150.000 CHF already, meaning altogether 3 briquettes.

Following the rollout the catering team of Dampffreunde der RhB served an Apéro in the “Allegra Hall”, sponsored partly by historic RhB, between the fund-raising locomotive and steam engine Rhaetia as well as the historic wagons C2012 (1889) and F4004 (1897) of Club 1889; the latter originating from the founding years of RhB. It was an atmosphere of lively discussions.

All persons present agreed: The new promotion locomotive is a piece of jewellery on Bündner tracks. For the Project Group RHÆTIA it is the most beautiful ever. 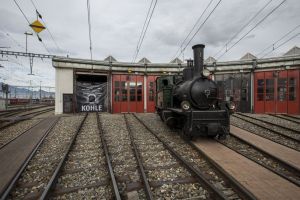 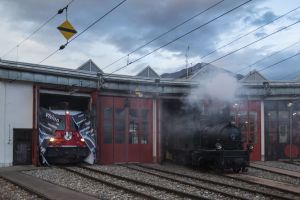 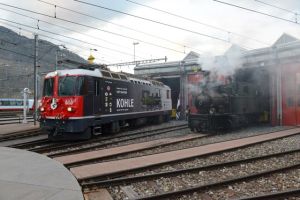 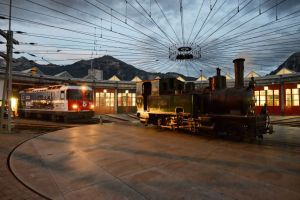 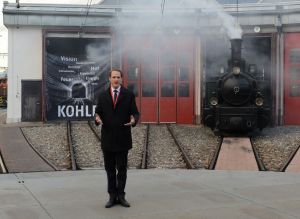 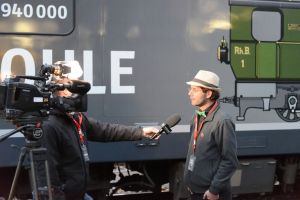 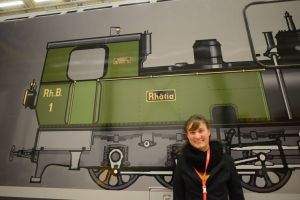 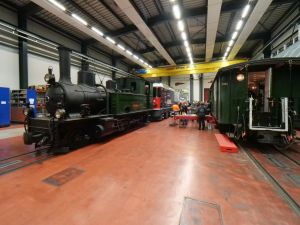